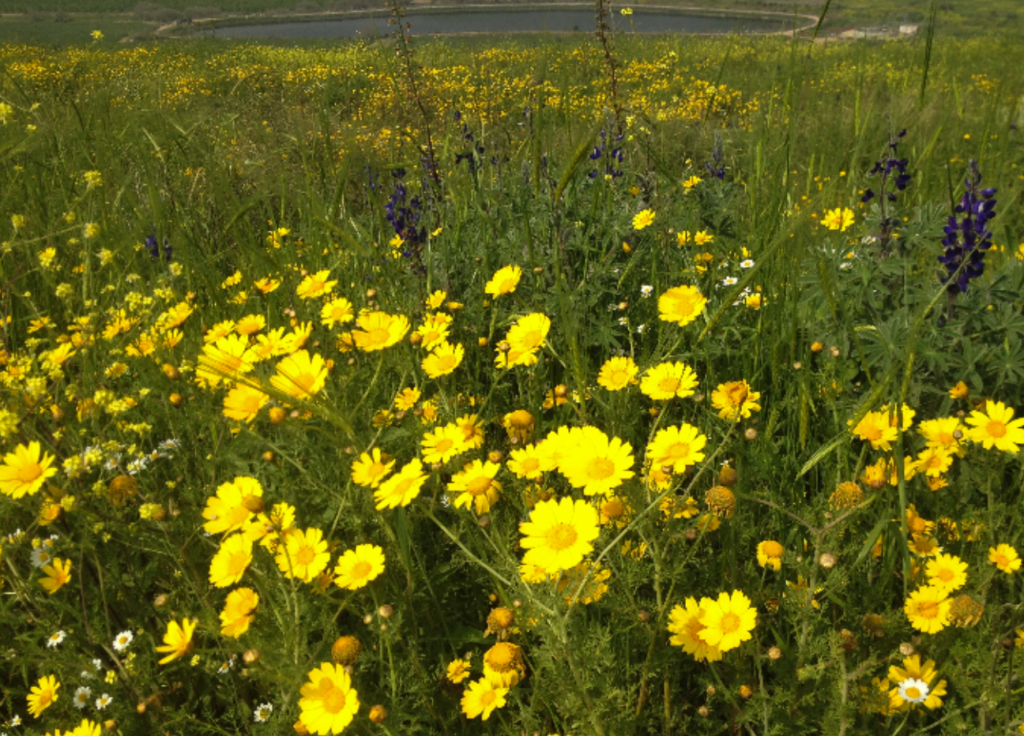 How strange it was to travel through northern Israel during the recent Passover vacation. The combination of heavy rains, cold, dark clouds and threatening times(just before Hizbullah attacks escalated along the Lebanese border) kept people away even during this traditionally heavy traveling season. But the region was stunning, with green hills that might have been transported from Ireland. Gushing streams washed out hiking trails. Heavy waterfalls filled their clefts with mist. The sunlight slanting through piled clouds cast a soft glow on the multi-colored carpets of flowers spread across the hillsides.

Such a profusion and variety of flowers –hundreds of species–annually burst open during the spring season, in this tiny splinter of land, including the desert areas which comprise more than  half of Israel..

In the north, I sometimes could count six, seven, eight different species of flowers within a radius of two meters or less. Bright red anemones and poppies, daisies, chamomile, wild carrot, streaks of wild mustard along the roadsides, oleander on the stream banks, lupines in hillside meadows; the plant zones intersecting through the buckled hills and valleys of Israel bring flowers for every  niche.

Due to a fortuitous confluence between later rains and a relatively early date for Independence Day, it should be possible during that holiday, at least in central and northern Israel, to still take in the beauty and variety of a blossoming spring in Israel. Travel the length of Mt. Gilboa, or to the Mt. Arbel overlook above the Sea of Galilee, or the Elah Valley west of Jerusalem, or towards Beit Guvrin and Lachish near the coastal plain, among the many spots displaying a floral extravaganza.

But as hard to absorb as the diversity of flowers, is the reality that within five to seven weeks, these flowers will have withered(some species flowering earlier this year have already disappeared). And the grass on the hills will be brown and parched.

Numerous commentators have emphasized that part of the power of developing Judaism was the de-sanctification of nature. In both the spring Jewish festivals, Passover and Shavuot, there is a clear emphasis on the historical and revelatory experience of the Children of Israel. But both festivals also include an acute awareness of the delicate shifting of nature from winter to summer, and an interweaving  of that awareness into a religious vision.

The Song of Songs, which we read during Passover, is infused with sensual love, and with a sense of beauty in spring which is multitudinous and intoxicating: “I am the tulip of the Sharon, the daffodil  of the valleys. Like the lily among the thorns, so is my love among the daughters.”(2:1-2)

But that time when the fig tree puts forth her figs and the vine blossoms give  their scent is a time when we literally count the days, the seven weeks of counting the Omer between Passover and Shavuot. And that seven-week period, as we shall see, was a crucial period in the agricultural and natural cycle in Israel.

“For the Lord your God is bringing you into a good land, a land of streams, of springs and underground waters flowing out in valleys and hills,” we read in Deuteronomy, “a land of wheat and barley, of vines and fig trees and pomegranates, a land of olive trees and honey(Deuteronomy 8: 7-8). Those plants listed(the honey standing for dates) of course represent the well-known seven species of Israel.

At the end of 49 days of counting the Omer(counting barley sheaves in Biblical times), we celebrate Shavuot, which commemorates the giving of the Torah at Mt. Sinai. But during the time of the First and Second Temples, it was also the time when the bikkurim, the offerings of the first fruit, were brought forth(as commanded in Deuteronomy 26: 1-11).  And according to the Mishna(Bikkurim, 1, 3), only the seven species were used for these first fruit offerings. But why?

During these seven weeks, writes Nogah Reuveni in his book “Nature in Our Biblical Heritage”, “the flowers of the olive, grape and pomegranate and date open, and the embryonic figs begin to develop. During this same period, the kernels of wheat and barley fill with starch, and so the fate of the crops of each of the seven varieties is determined.”

The shaping of those agricultural fates comes at the very seasonal moment in Israel which is marked, Reuveni continues, “by multiple changes and climatic contrasts.” Hot, dry southern winds  alternate with cold western and northern winds, which might bring late rains.

A delicate balance existed between these dry southern and cold northern winds and their timing, as the Talmud understood(Tractate Baba Batra 147a). For example, the timing of a cool wind might benefit ripening grain while damaging opening olive and grape blossoms. The fate of the seven species, writes Reuveni, “depends on the delicate balance and exact timing of opposing forces of nature during the critical period between Passover and Shavuot.” Thus, bringing these fruits as bikkurim offerings emphasized the dependence on God.

As I traveled through an emptied north in this tense political atmosphere, I found the blooming flowers, the rushing water, strangely reassuring. While knowing that these bursting buds represented the transience  and fragility of life in the Biblical world, they acted for me as reminders of the finely-tuned intricacy of creation, which will continue with its annual unfolding—whatever our momentary political crisis– as it did before the eyes of Biblical observers.