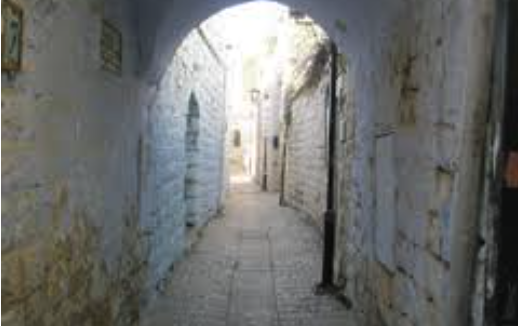 I confess that, despite much reading, I am Kabbalah-challenged. I can’t tell my sephirot from my chakras, and all my gematria adds up wrong.

But I stand in awe of the mystical explorations that emanated from the Galilee hilltop town of Safed, during the 16th century. As I wander through the steep hillside maze of Safed’s Old City, with its narrow alleys, vaulted passages, arched windows and blue-painted doors and walls, I feel deeply moved by what happened here.

During a century of terrible persecution against Jews in Catholic Europe, which included burnings, forced conversions, butchery, exploitation, and numerous expulsions, the esoteric masterpiece of Spanish Kabbalah, The Zohar, written in the late 13th century by Moshe De Leon, trickled through Jewish academies. But in Safed, Kabbalah burst forth like a spring in the Galilee sunlight.

After the expulsion of the large Jewish population in Catholic Spain in 1492, the Ottoman Empire, for its own political, ideological and economic reasons, invited the Jewish refugees into their burgeoning realm. Twenty-five years later, when their rule extended into Israel, some of the Jews, including a handful of notable sages, moved to their ancestral homeland.

With sources of waterpower in its nearby ravine,Safed became a major weaving center for the empire, a prosperous town of 30,000. Its cloth was exported to the Balkans and Western Europe.

There gathered here an array of scholars and rabbis unparalleled in the Jewish world. Their intellectual and spiritual ferment ranged from strict Talmudic study to, writes James Carroll in CONSTANTINE’S SWORD, “unbridled mystical theorizing, to feats of memorization, to pursuits in chemistry and astronomy along tracks laid down by Kabbalistic texts.” In a short time, three synagogues increased to over twenty,

Safed’s famous Chief Rabbi, Yosef Caro, exiled from Spain, lived in Safed for forty years and wrote his great works here. Beit Yosef traced Jewish law back to the Bible. The SHULHAN ARUCH(“the Set Table”), which organized final rulings of Jewish law by subject, became the primary authority on Jewish law in the following centuries. Questions of Jewish law were submitted to him from all over the Jewish world

On Alkabetz St., the Jewish Quarter’s main alley, stands the Yosef Caro Synagogue. Like many of the Safed’s renowned synagogues, it is not the original building in which its namesake worked and prayed. Though some buildings date back several hundred years, others lay in ruins, due to neglect, fighting(the quarter lay under intense siege during the 1948 War of Independence) and powerful earthquakes in the 18th and 19th centuries. While dating from 1860, the building stands, traditionally, on the spot where Caro’s Beit Midrash stood, packed with his students. Check out the old genizah, which holds some volumes dating back three hundred years.

In the basement, supposedly the original, Caro met with his angel, who taught him many rulings included in his tomes on law. Caro revealed his mystical side in Maggid Misharim(“The Teller of Truths”) in which he relates discussions with the angel. But the basement is closed, due to local legend that the angel remains there and dislikes disturbances.

Safed’s status as a Jewish academic center, and its Kabbalistic movement, were well-established when the mystical genius Yitzhak ben Solomon Luria(known as ha-Ari, the Lion) arrived around 1569, after absorbing the Zohar on an island in the Nile. In three years in Safed, until his death in 1572 at the age of 38, Luria mesmerized a wide circle of followers.

They walked through the green hills around the town. They threw themselves on the graves of Talmudists buried in the Galilee. They achieved intense meditative states by focusing on the letters of God’s divine names. Disciples swore that Luria understood the birds and talked with the prophets.

Two synagogues in Safed honor Luria. The Ashkenazi ha-Ari Synagogue–built after his death, destroyed in a 19th-century earthquake and then rebuilt—stands, goes tradition, on the spot where Luria and his followers greeted the Sabbath in nature(note the elaborate 19th-century Torah ark with its delicate carvings).

So powerful an experience was the welcoming of the Sabbath for them, that not only did new songs emerge, but a whole new, special Friday night prayer service evolved and spread through the Jewish world. “Lecha Dodi”, welcoming the mystical Sabbath Bride, and “Shalom Aleichem”, welcoming the Sabbath Angels, are two of the famous liturgical songs which originated in Safed, echoed through its hills and spread to synagogues worldwide.

Luria taught(though he wrote very little) that God had retracted from the cosmos to create a space for creation. God’s divine light was poured into vessels to give it form. But the powerful light shattered the vessels, and sparks of divine light scattered through the world. Jewish suffering reflected this breakdown in the cosmos. God made in humanity his partner in finding the sparks and mending their vessels.

While his understanding of the Kabbala was intricate, Luria’s basic message was clear and simple. Kabbala burst out of esoteric circles into a traumatized Jewish world. While facing danger and on the edge of despair, Jews found a source of commitment, faith, hope, and even joy. Joy was essential to the task of cosmic mending. Happiness encouraged loving and cleaving to God.

The Sephardic Ha-Ari Synagogue, located further down the hill, stood during Luria’s lifetime. According to tradition, both he and Yosef Caro prayed there. In a small, dark niche on the side, Luria—so goes the legend—was taught Torah by Elijah the prophet. Into the 1930s, there were tales of people mysteriously dying there.

Luria’s mikveh is located still further down the hill, above Safed’s cemetery, in which are buried Luria, Caro and other prominent scholars and Kabbalists from that period. The prominent domed tomb, legend has it, marks the gravesite of Hosea the prophet . The cemetery also includes the graves of soldiers who defended Safed during the1948 siege, the victims of a pogrom by local Arabs in 1929, and the child victims of and infamous terrorist school-bus hijacking in Ma’alot in the early ‘70s.

Legend hovers around  Safed synagogues and streets. The Bana’a Synagogue, named after Rabbi Yossi Bana’a, is also called the White Synagogue. According to the story, an Arab governor threatened expulsion of Safed’s Jews unless they brought him a certain number of white chickens. But residents prayed at Rabbi Bana’a’s grave, and all the town’s chickens turned white.

In Safed, today, there are those who can point out the narrow, stepped alley where, according to local legend, the Messiah will climb into the town. Indeed, Safed overshadowed Jerusalem as a Jewish center in the 16th century. It had more people than Jerusalem, more synagogues, more Torah sages.

The 15th-century Kabbalist Isaac Abuhav was one of them. One more Safed legend says that, in a synagogue named for Abuhav,  a Torah scroll written by him sat in an ark in the wall. So holy was that  scroll that, during the 1837 earthquake, only the wall with the ark containing it remained undamaged.

The Abuhav Synagogue is visually striking, with its blue, vaulted interior and decorated ceiling(Marc Chagall painted a scene of its interior in 1931). But the fact that a Koran was kept in one ark, as a precaution against Muslim attack,  reveals the fragility of the Jewish community, during the time of the Ottoman Empire.

By the end of the 16th-century, the original glory of Safed’s Kabbalistic age was fading. Most of the luminaries were gone. New European weaving centers and techniques undercut Safed’s markets. Plagues, earthquakes, and Ottoman corruption took their toll. Later Hassidic communities came and filled the breach.

For a glimpse of old Safed architecture and displays of Jewish life, visit the museum at Beit Hameiri, towards the bottom of the Old City. While most of the multi-leveled, multi-arched structure post-dates the 1837 earthquake that destroyed so much of the town, lower sections date back to the 16th century(04-6971307).

Strolling around the narrow lanes and alleys of Safed’s Old City and adjacent Artists’ Quarter is enjoyable. And the stunning view from the top of the Citadel Park, in the center of town, reaches the Sea of Galilee.

But don’t look for the legacy of its brief, shining moment in the ruins of thick-stoned buildings; what mystic would put stock in buildings, anyway.

That legacy might best be found by walking out to an adjacent hillside on a Sabbath eve, as the early Kabbalists did; clouds brush Mt. Meron, dusk fills the valley like dark wine rising, and different melodies for “Lecha Dodi” pour out of the numerous synagogues.