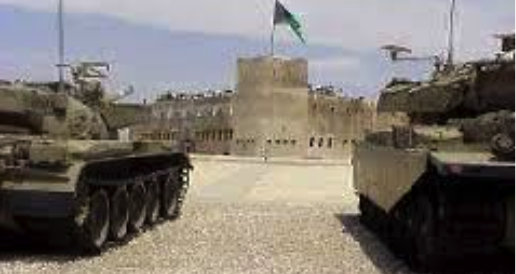 
Everyday, thousands of cars on the Jerusalem-Tel Aviv highway zoom past the junction of the road to Ashdod, passing the old British police fortress of Latrun, with a tank perched on a tower beside it. The tank monument is part of a museum and memorial to the armored corps of the IDF.

But the Latrun fortress itself stands as a sort of monument to the the bloody struggles that took place for this crucial point fifty years ago during the War of Independence.

The protracted battles that exploded around the fortress and wheat fields of Latrun, like the those of the entire war, were marked by chaos, acute shortages of materials and manpower, dissent within the command structure, and by the mistakes that appear tragic and even stupid in hindsight. The battles were also characterized by blind arbitrary luck, incredible courage, sacrifice and determination.

From the observation post on the roof of the fort, the crucial importance of this topography becomes clear. To the west and south, the hills are low, gentle, rolling. But east of the fortress the hills thrust up with sudden ruggedness.

According to the biblical account, Joshua charged down after the Amorites from the Horon descent, northeast of here in the Ayalon Valley. There the Amorites were pummeled with stones from the heavens, and the sun and moon stood still while Joshua finished them off.

Also near here, Judah the Macabees defeated the Seleucids. King Richard the Lionhearted was also here: the ruins of a Crusader fortress he controlled gazes down from the high ridge top to the east.

And on these gentle swells, golden with wheat in the spring of 1948, with the Jewish state just ten days old, European refugees fresh off the boat, with no training and little Hebrew, charged toward this massive fortress with its iron gun slits.

David Ben-Gurion had insisted repeatedly that Latrun must and must – and could – be taken.

Latrun guarded the access to the Sha’ar Hagai pass, four kilometers eastward, where the road to Jerusalem narrowed into a stony ravine bottleneck of stony ravine. Without that pass the Jerusalem road could not be controlled. The 95,000 Jews in Jerusalem were in danger of starvation and capture and the city itself would be lost.

Ben-Gurion insisted on saving Jerusalem by taking Latrun. Chief of staff Yigael Yadin fiercely opposed the effort, arguing that it would dangerously thin already embattled forces. Yadin believed that Jerusalem could be dealt with later, and that a direct assault on Latrun would be suicidal.

Ironically, the Arab garrison had abandoned the outpost shortly before. An Israeli unit had moved in and had also left. So the focus of several future bloody battles was left empty for two critical days, before an Arab force returned.

A sense of foreboding gripped the usually confident Israeli officers as rapid battle plans were laid out and new immigrants were gathered at their launching point. The names of some were not even officially registered anywhere.

They had trained for barely a week, had no common language, and were issued outdated weapons,, some of them holding guns for the first time. and unreliable weapons. Some of the men wore bright shirts and sandals. They lacked a common language, and enough water to withstand the scorching heat.

What was meant to be a surprise pre-dawn attack started late, and the rising sun revealed motley units charging across the wheat fields. But heavy artillery (which according to intelligence reports hardly existed) was trained on every rise and gully.

The attack fell apart as Arab sharpshooters ravaged the disintegrating ranks. Raw recruits, screaming in Yiddish, broken Hebrew and a cacophony of other languages, panicked and broke ranks, to be mowed down like the wheat around them. Remnants who gathered on a hill were in danger of encirclement, and retreated with the dead and seriously wounded who had been uncharacteristically left behind.

A second attack, commanded by the American colonel Mickey Marcus, nearly succeeded, with Israeli sappers and armored cars penetrating the fortress courtyard; the shell holes can still be seen in the thick walls. But enemy artillery, and a series of mistakes, missed cues and un-used forces turned it into defeat.

By the time a third attack was launched, the alternative Burma Road – a thin track to the south that was carved out and completed with stunning daring and rapidity – now threaded the steep, rocky hills towards Jerusalem. Four attempts failed to take the fortress, but ultimately the Burma Road allowed Israeli convoys to bypass Latrun completely.

Today, armored vehicles, including tanks from the 1948 war, again surround Latrun, as part of the armored corps museum displays and memorial there. The strength and sophistication of Israel’s armor since then, on view at the museum, offers a sharp contrast to to the vulnerable contraptions scraped together for the assault on Latrun fifty years ago.

Displays include the American tanks that are part of Israel’s modern arsenal, Russian tanks captured from Arab armies, and several models of the innovative Israeli Merkava, considered one of the best tanks in the world.

Inside the museum, a movie highlights the versatility of modern armored vehicles, and the camaraderie and expertise of tankistim. For me, the most powerful scene in the film iwas the blinded tankist pleading for the ability to see his baby daughter for just one moment.

Outside, a long wall engraved with names honors the armored corps soldiers who died in action. But inside, there is a different kind of memorial, a computer filled with files on the lives of the fallen soldiers, with reminiscences by family and friends. As the reader learns about the individuality of each man listed on the outside wall, the enormity of the losses becomes overpowering.

But for so many who tried to take this strategic point in their first days in their new homeland, to help save lives in Jerusalem, there are no computer files; their names remain unknown.