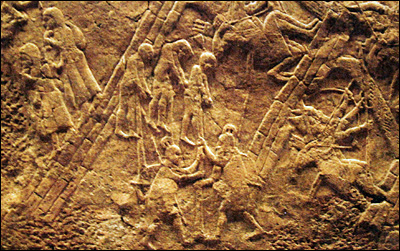 There’s something ghost-like about Tel Lachish. From the gravel access road it resembles the movie-set shell of a haunted mansion.

A wall looms high and vivid in the northwest corner, bare of the dirt that covers the rest of the tel. It is probably part of the buttressed wall that stood as Lachish resisted the invasion of the Assyrian Empire, 2,700 years ago, during the reign of King Hezekiah over the kingdom of Judah.

Along that buttressed wall, which exploited an earlier Canaanite trench below, one can easily imagine the Judeans perched on its ramparts shooting arrows and hurling stones, torches and perhaps clay jars filled with hot oil down on the invaders.

For it is war – its shadows and all-pervasive biblical (not to mention human) reality – that we see, more than anything else, while picking our way through the undeveloped but potentially riveting site of Lachish.

We can best understand Lachish by staring at the Assyrian wall sculptures which were discovered in Assyria’s ancient capital, Nineveh (now Iraq), and other sites, and are now exhibited in the British Museum. The Assyrian rulers lined their palaces with battle scenes advertising the awesome power of their empire.

In its time, Assyria was the strongest regime to have rolled across the ancient Near East. It stretched from east of the Tigris and Euphrates rivers to the Mediterranean Sea, and from just below the Black Sea south to Gaza, Sinai and finally the Nile Delta and points south.

In 701 BCE, the Emperor Sennacherib invaded and subdued the coastal territory of the Philistines, stopping an Egyptian army that rushed north to challenge him. Then he turned east to conquer the recalcitrant little hilltop kingdom of Judah. Hezekiah paid heavy tribute, but his kingdom was the only pocket left uncontrolled by the empire.

One wall relief, taken from Sennacherib’s palace in Nineveh, depicts the battle for Lachish. That town, which guarded the road from the southernmost coast up to Hebron and the southern Judean hill country, faced the full force of Assyrian power and wrath.

If you can’t get to London, stare at a photograph (available in many history and archeology books) of that multipanel frieze, and envision it as a three-dimensional computer model you can enter. You’ll be swept into the chaos of siege and battle.

Four-wheeled battering rams rolled up a carefully constructed siege ramp and pounded the wall, probing for weaknesses. Ranks of archers and sling-throwers took aim at the defenders on the parapets. The Judeans shot arrows and hurled stones and firebrands.

Bold Assyrian infantrymen raised their shields while trying to heave the scaling ladders up. Some, repulsed, hurtled to earth. Bodies piled up. Screams and smoke filled the air. Still the battering rams pounded.

ASSYRIAN rulers glorified war. They developed specialized corps – cavalry, sappers, combat engineers, snipers, aquatic units – and “modernized” their weapons and strategies. Perhaps that was why Isaiah, who witnessed the growing Assyrian threat, prophesied a time when nations would no longer “study war.”

You will see the “modern” military machine Assyria unleashed against Lachish as you follow the path from the parking lot to the tel’s gate structure. On your right, the cutaway slope of tightly compacted earth and stones is the Assyrian siege ramp, built against Lachish’s southern wall. (Inside the wall, the Judeans built a counter-ramp.)

Near the siege ramp, a path slopes up toward Lachish’s ancient gate on what was originally a chariot ramp. As you climb it to the elaborate gate structure, the largest in ancient Israel (Lachish was evidently second in importance only to Jerusalem), note the city wall on your right. An advancing Assyrian, typically carrying his shield on his left arm, would expose his right flank to archers on the walls.

At the top, the invaders had to break through an outer gate, pivot to the right while they were packed in a small courtyard and exposed to fire from bordering towers, and break through an inner gate, the remains of which you can now walk through.

But the Assyrians surmounted the town’s defenses, as they did, according to Sennacherib’s own account, at 45 other Judean towns. Inside Lachish’s walls, though the site is undeveloped and only partially excavated, there is evidence of fierce burning at the level of the Assyrian invasion. Arrowheads, sling-stones and the crest of an Assyrian helmet offer only hints of the tumult and destruction highlighted in the Assyrian frieze.

The people inside these walls must have been terrified, perhaps huddling in the palace complex that still sits just to the left inside the gate complex. Perhaps, in what might have been a spin-off sanctuary of the Temple in Jerusalem, priests performed desperate rituals in hope of divine intervention.

The residents were right to be afraid, for gruesome fates awaited captives of Assyria. They were uprooted, tortured, led away with bags over their heads, with limbs lopped off, with rings in their noses or lips. The stone relief of Lachish’s conquest shows the exile of prisoners as vividly as the battle itself.

The horror recorded at Lachish could be reconstructed at virtually any biblical city or fortress. But toppled stone walls cannot reveal the hatred, the fear, the blood and the destroyed families. In recalling the drama of the Lachish conquest, footage of Kosovan refugees takes on a perspective of timeless, tragic, human experience.

USING Lachish as a base, the Assyrian army moved into the hills against Jerusalem but, according to II Kings (20:35), was smitten by an angel of God and retreated. Lachish was rebuilt, again became the southwest guardian of Judah and later faced a new enemy, the Babylonians.

Evidence linked to the Babylonian attack, though sparse, is chilling and poignant. Among the 18 Hebrew ostraca (fragments of inscribed pottery) found in a guardroom, one reads, “Let my lord know that we are watching over the beacon of Lachish, according to the signals which my lord gave, for Azeka is not to be seen.”

This is like a movie scene in which the blip of an aircraft disappears from a radar screen. That one simple message encapsulates Lachish’s isolation and doom before the Babylonian onslaught. The book of Jeremiah (34:7) confirms that Azeka and Lachish were the last cities to fall, leaving Jerusalem alone.

Tel Lachish is located about three kilometers south of Route 35 (the road between Kiryat Gat and Beit Guvrin), on the road leading to Moshav Amatzya. It is open to the public, with no specific hours, entrance fee, supervision or facilities. Identification signs are minimal. To enjoy the site more fully, bring a guidebook.