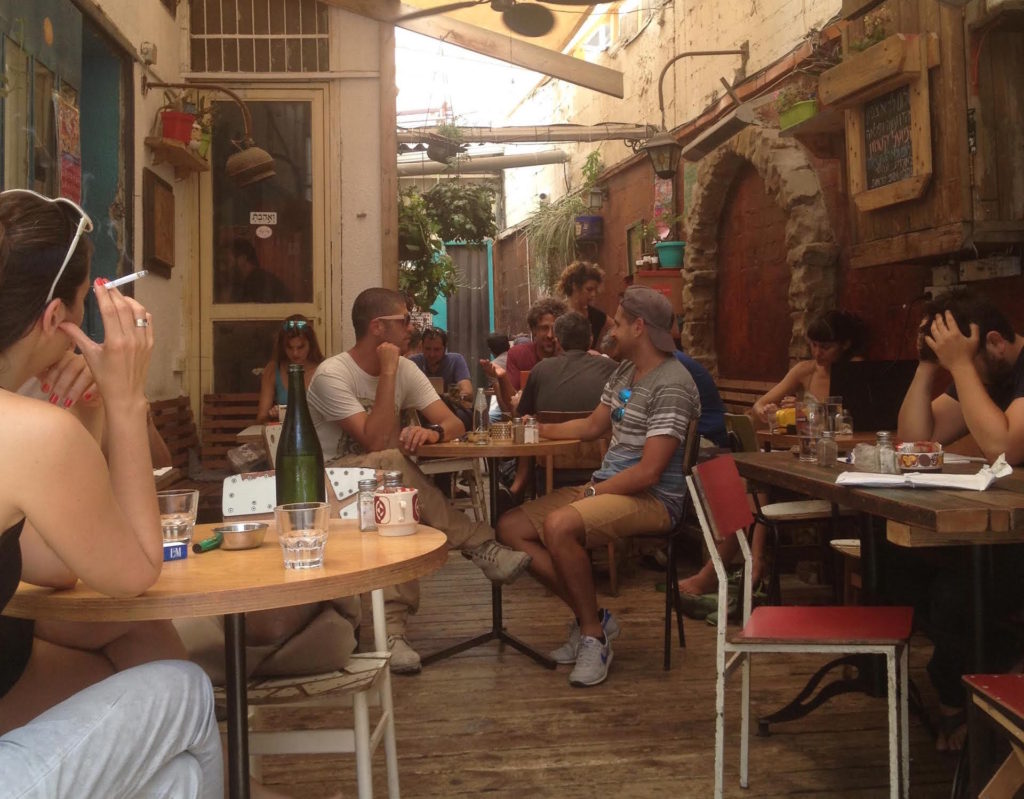 I wish that the Nahalat Shiva neighborhood in central Jerusalem, right off Zion Square, was bigger. Because the tiny, 15-dunam area, extending from the main traffic artery of Jaffa Road in the north, to Hillel St and Independence Park in the south, has been renovated in a beautiful and charming fashion. Looking down Yoel Solomon Street, with its restored stone facades, its balconies with ornate, brighly painted iron grillwork and flower boxes filled with geraniums, its red tile roofs, ceramic street signs and brick-paved pedestrian passage, you could almost feel you were glimpsing the French Quarter in New Orleans.

By Zion Square on a Saturday night, young ultra-Orthodox Jews will shake their peot (sidecurls)to the Hasidic music blasting from speakers, while in the plaza at the opposite end of the neighborhood, hip-looking vendors will sell earrings and other crafts. Jammed between those two poles, along the two main streets, Yoel Solomon Street and Rivlin Street, and the alleys connecting and paralleling them, the colors glow in the bright lamplight, the crowds are lively, cars are absent, and music and cooking aromas spill out.

A 19th-century synagogue with a sculpted iron door faces a tea-and-pie shop. A tiny storefront is divided into a locksmith’s stall and a shop selling the spices that comprised the incense used in the Temple. In a new-age shop a marijuana-leaf mobile wheels slowly above a menorah carved of pink Jerusalem stone. And where else will one courtyard include an art gallery, a biblical-harp shop and a Korean restaurant?

Korean, Yemenite, Morroccan, Chinese,  Mexican and Italian are just some of the types of restaurants jammed into this tiny maze, along with various bars, pubs, coffee-houses and a bookstore-cafe promoting readings, lectures and poetry slams. More restaurants are found in adjacent Beit Feingold, the classic 19th-century Jerusalem house and courtyard, which once housed the city’s first movie theatre.

But a couple of tall office buildings, totally incongruent with the low stone 19th-century houses, jar the senses and show how close this old neighborhood came to disappearing. For by the 1970’s, Nahalat Shiva was crowded, filthy and dilapidated. Only at the last moment was it saved from demolition and slated for preservation and renewal, but not before several of its earliest houses, irreplaceable and so important to the story of the growth of modern Jerusalem, had been destroyed.

Nahalat Shiva was begun in 1869 by seven young religious Jews–several of them born in Jerusalem–and their families. They were not the first to break out of the walls of the dirty, stifling, overcrowded and poverty-stricken Old City(at that time, what is now known as Jerusalem’s Old City was basically the entire city). Moses Montefiore, the Jewish philanthropist from England, had already financed the building of Mishkenot Sha’ananim, the first residential quarter beyond the walls, and a core of Jews of Moroccan descent had built another neighborhood, Mahane Yisrael.

But these early efforts did not spark large-scale settlement. Something new was needed, for Jerusalem’s Jewish population was rapidly swelling in the mid-19th century, with a steady influx of religious Ashkenazi Jews that severely strained the community’s housing and meager resources.

The seven young local men who initiated Nahalat Shiva(“The Inheritance of the Seven”) broke out not only from the walls, but from: a debilitating system of charity which sustained many of the city’s Jews; from the traditional leadership which controlled the allotment of that charity; from the exploitation of Muslim landlords; from a lack of productive work and the accompanying theft of human dignity; from filth and disease, and from the stifling, corrupt control of the reigning Ottoman Turks, whose grip slackened beyond the walls.

These seven and their families were courageous, visionary Jewish pioneers before political Zionism existed, when Theodore Herzl was not yet ten and David Ben Gurion not yet born. One of them, Yosef Rivlin, saw the building of the new Jerusalem as his mission. He lived in the first house in this stony terra incognita, rigged with a bell and lamp to call the police. His wife died several days after she was attacked by an intruder. Yet he went on to initiate eleven Jerusalem neighborhoods, “with a good heart and a low spirit,” in the words of Israel’s Nobel laureate S. Y. Agnon.

Another famous founder, Yoel Moshe Solomon, helped begin the first Hebrew newspaper in Israel, the Bikkur Holim Hospital outside the city walls, and the settlement of Petach Tikva in the coastal plain, where he almost died of malaria. But he lived for the rest of his life in his house in Nahalat Shiva.

The land was first purchased in 1867. The story goes that the wife of one of the original seven entered the Turkish land registry office dressed as an Arab woman, to hide the purchase of the plot from landlords who might try to interfere. The charter which the seven organizers drew up became a precedent and model for those in the neighborhoods that followed.

Each person contributed a set amount of money to a common fund, from which two houses were built each year. The owners, chosen by lottery, added their own money to the sum provided them by the common fund. While starting out remote, the new neighborhood, abutting the new Jaffa-Jerusalem trunk road, soon found itself in the heart of a burgeoning city. By the early 1870s fifty families lived there. Later, more secular, modern Jews, sparked by the flame of Zionism, moved in among the first generation of residents.

Today, walking along Solomon and Rivlin streets and the alleys between them, you can still find a few signs marking specific buildings that were part of this first bold venture. On Ma’alot Sheva Street, for example, the Nahalat Ya’acov Synagogue, the first Ashkenazi synagogue built outside the Old City walls, in 1873, still stands. A few plaques mark other buildings or the sites of earlier buildings. A Magen David carved from stone or in the hollow space within a stone can be spotted here and there, and the low slanting roofs, sharply turning courtyard stairs and filled-in arches convey another age, even if the buildings are not marked and the first families have long since disappeared.

When you are done seeking these sparse signs of modern Jerusalem’s beginnings, treat yourself to a cappuccino; choose a cafe where the music is good.